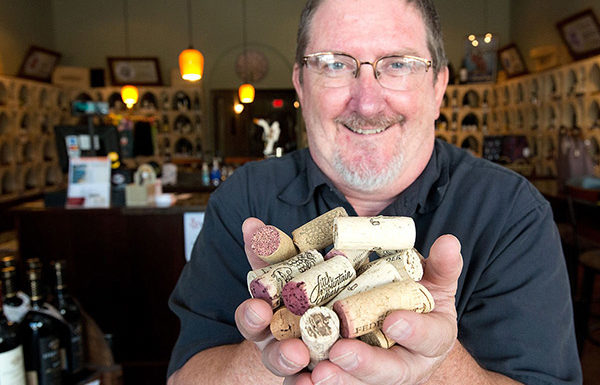 IOUX CITY | Although WineStyles’ Jerry Janssen has seen some of his customers repurpose cork into DIY art projects, most bottle stoppers are simply thrown into the trash.

“I always thought that was a shame,” he said. WineStyles is at 5002 Sergeant Road. “First of all, people go through a lot of cork. More importantly, cork is a very recyclable raw material.”

This is why WineStyles has partnered with ReCORK, North America’s largest natural cork recycling program.

An alliance between wine stores, restaurants and individuals, ReCORK has collected more than 70 million corks since 2008, according to its website. Collected cork will be repurposed into products ranging from floors to exercise equipment to shoes.

“Cork comes from cork oak trees in countries like Portugal and Spain,” Janssen said. “The bark of a cork oak is harvested by hand every nine years. Trees are never cut down and such harvesting does no harm.”

“The harvesting of a cork oak is one of the best examples of traditional, sustainable land use,” Janssen said. “It’s also a way for us to reduce our carbon footprint.”

Janssen said this is important to WineStyles’ customers.

“Increasingly, our customers have been asking for sustainable and organic wines,” he said. “The best-tasting wines are the ones with no chemicals and few ingredients.

“Wine is natural,” he added, “and so is the cork.”  Since putting out a ReCORK recycling box a few weeks ago, Janssen said customers are already bringing in their used bottle stoppers.

“If you give people an option to reduce their carbon footprint, they will take it,” he said.

It’s certainly better than having cork turn up in landfills.

“There are so many ways to reuse cork,” Janssen said. “Whether it goes into flooring, yoga blocks and high-end footwear, cork can easily have a second or third life.”