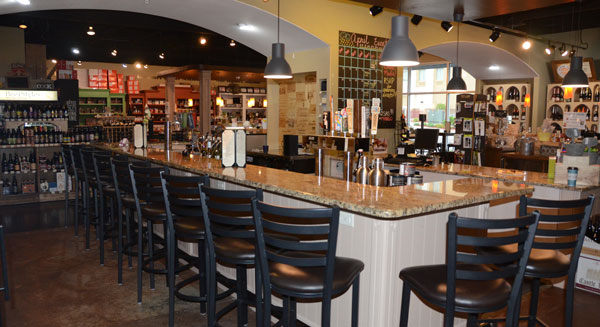 While the grocery store may be the place most people think of when they want to purchase wine, one Iowa-based franchise wants to bring a little style to the process.

The appropriately named WineStyles Tasting Station, co-owned by Andrea and Bryan McGinness, has been running since 2002, but the couple has only owned it since 2012.

WineStyles franchisee themselves, Andrea and Bryan opened their first location in 2006 and worked their way up to Area Developers for Iowa and Illinois before buying the company from the founder six years later and moving the headquarters to West Des Moines.

“We’ve spent the last few years, restructuring, rebranding, firming up our foundations and refocusing our efforts and now we’re ready to sell more franchises,” Andrea said during a recent interview from the franchise’s corporate office.

While the main focus of WineStyles Tasting Station is wine retail, the couple has expanded what it offers and now features a wine bar that serves not only wine, but craft beer, gourmet cheese, artisan chocolate and even light food.

So far, WineStyles Tasting Station has more than 20 stores in nine different states that stretch from Alaska to Florida with a new store set to open in January.

Although the franchise is far reaching, its core remains in the Midwest with five stores in Iowa, five stores in Texas, and significant presence in Illinois, Nebraska and Virginia.

“We want to expand organically from our core in the Midwest,” Andrea said.

This strategic approach to expansion is because logistically, they want to be able to easily access their franchisees and expand further in areas where they already have area developers in place, as they rely on their area developers to be mentors to new franchisees.

The couple is willing to look at other areas for expansion, Andrea said. The brand offers area developer franchise opportunities in exclusive territories outside of the Midwest.

“We’re really looking at quality versus quantity,” Bryan added. “Slow and steady wins the race is our mantra here. We’re not looking to open a hundred stores a year, we’re looking at a slow, steady open rate.”

Business acumen, entrepreneurial spirit and the ability to follow a system are the criteria the couple is looking for in franchisees, as well as someone who knows about wine and craft beer and is eager to learn as much as they can about it.

“Customers are pretty savvy and when they come into our stores, they expect great service, so you need to have a little bit of wine knowledge,” Andrea said. “Even if you don’t know everything there is to know about the wine industry, you do have to enjoy it and want to learn more.”

The McGinnesses said WineStyles Tasting Station fulfills a couple of needs for people, those being a place to purchase wine and also a place where they can sit down and enjoy wine and beer in a pleasant environment.

On top of that, WineStyles Tasting Station aims to keep the wine buying experience as affordable as possible for its customers, as the majority of wines offered retail for under $30. However, the stores also offer an ‘If You Insist’ section for those who prefer to spend more than $30 for a bottle.

In addition to one-on-one customer service, one of the best parts of running a WineStyles Tasting Station, Bryan said, is proving to customers that you do not have to spend a fortune on a nice bottle of wine.

What WineStyles Tasting Station offers customers that they cannot find elsewhere when purchasing wine is the warm environment. In drastic contrast to the grocery store where people often go to buy their wine, WineStyles Tasting Station looks like an old-world wine cellar and invites guests in with its warmth and charm to sit down and enjoy a drink and a bite to eat.
Andrea described it as a hybrid between a wine retailer and a wine bar.
“You don’t feel like you’re walking into a grocery store to buy a bottle of wine or beer or cheese,” she commented.

When franchisees first open their stores, they spend a week taking hands-on training in the West Des Moines corporate location. In addition, WineStyles Tasting Station has monthly conference calls, and an annual convention where franchisees can connect with each other and share ideas. The convention is usually held in wine country where they visit different wineries, breweries and creameries.
Franchisees continue their education through various programs offered by WineStyles Tasting Station and have access to ongoing marketing, IT, and operational support, along with having a training and communications team at their disposal.

A major feature for franchisees is WineStyles Tasting Station’s in-house legal council, as they advise franchisees about the various liquor laws from state to state.

The WineStyles Tasting Station team creates various streamlined, educational programs such as tastings or winery and brewery spotlights for customers, working with Master of Wine and Master Sommelier Doug Frost, so franchisees can easily replicate them at their own stores.
“We hand over a turnkey ‘event-in-a-box,’ so to speak, so that our franchisees are able to execute successful in-store events for their customers,” Andrea said.

With a formula for strong business growth in place, all the Midwest franchise needs now is entrepreneurs who are ready to work that formula, preferably entrepreneurs with a little style.