As one of the most versatile wines in the world, ranging from bone dry to rich and nutty to the dessert styles, sherry is “a pairing dream, whether in a Spanish restaurant or not,” says Elizabeth Mendez, proprietor and beverage director of Vera Restaurant & Wine Bar in Chicago. “While port is a little less diverse in the range of dryness, it is also enjoyable with a wide range of food.” Vera carries more than 50 fortified wines, mostly sherry, but also port and Madeira, as well as a diverse range of Spanish vermouth. Prices range from $6 to $22 a glass. Bottles of sherry, mainly 375 ml., range from $28 to $65. The restaurant sells 50 to 100 glasses of sherry a week. Amontillado, says Mendez, is by far the best-selling style.

Although port and sherry both fall into the fortified wine category, their on-premise presences are strikingly different. Port claims a long-standing niche as a traditional after-dinner indulgence, with a cheese course, chocolate desserts or on its own to end the dining experience. Sherry, because of its unusual flavors and range of styles, is a harder sell and there’s lower penetration in the market. Restaurants often promote these fortified wines by pairing them with food. And bartenders are discovering port and sherry can be flavorful, low alcohol bases for inventive cocktails.

PORT TACK
“Port is ‘sneaky popular’; Sales are steadier than you might think,” says Ryan Valentine, director of beverage for Columbus, OH-based Cameron 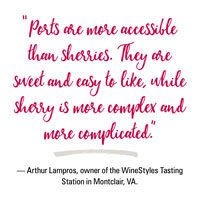 Mitchell Restaurants. Most port sales are post-dinner. Every restaurant in the multi-concept portfolio carries a selection of ruby, tawny and vintage ports, says Valentine. “We have seen an uptick in port sales over the past year or so,” says Brett Allen, general manager/beverage director of 360 Bistro in Nashville. The fine-dining restaurant stocks a dozen ports, ranging from $10 for a glass of 10-year tawny to $30 for a 30-year-old, as well as some vintage ports dating back to 1970 for about $375 a bottle. The bistro typically pairs ports with its cheese selections, Allen says. As for sherry, 360 Bistro sells a good deal of entry-level Tio Pepe, but not much of the more interesting styles. “People are more familiar with port than with sherry, at least in our market,” Allen notes. “Ports are more accessible than sherries. They are sweet and easy to like, while sherry is more complex and more complicated,” says Arthur Lampros, owner of the WineStyles Tasting Station in Montclair, VA. WineStyles, a franchised hybrid wine shop/restaurant, offers a bistro-style menu with by-the-glass selections as well as off-premise bottle sales. Lampros also owns Giorgio’s Restaurant next door. WineStyles always offers two ports by the glass for $8 to $12, and 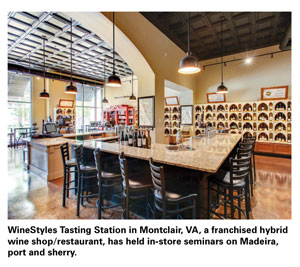 an example or two of each of the port styles by the bottle. Bottles start at $10 for a simple ruby and run up to $150 for a few of the higher-end colheitas and vintages. Giorgio’s offers one port by the glass. “We sell more of the lower-end ports off-premise, but more of the higher end on-premise,” says Lampros. And if guests don’t finish the bottle, they can take it home. “That’s a good selling point,” he adds. Customers seem to have a sweet tooth, because WineStyles sells more of the honeyed PX styles than dry fi nos. But Lampros thinks that might be a factor of his suburban location. He sees urban audiences learning to like drier finos and amontillados. “The hipsters are discovering sherry.”

“Sherry is a hidden gem; there’s so much to explore, and all of it is excellent,” says Stephen McGinnis, wine director for Estrellon restaurant and tapas bar in Madison WI. Part of the four-unit Deja Food Restaurant Group, Estrellon currently carries 16 different sherries. There are six by-the-glass elections, but McGinnis will open just about any bottle if there is interest; any leftover wine is used for staff education. Most sherry sales are by the glass, because there is less trial risk for the guest; prices range from $6 to $18 a glass. The bottles top out at $150 for a half bottle of El Maestro Sierra Amontillado “1830.” Estrellon also offers a flight of ports. Sister restaurant L’Etoile has a number of sherries and ports, which pair well with the seven-course tasting menu. “We hang our flag on sherry at Mockingbird Hill,” says Derek Brown, owner of the self-proclaimed “sherry and ham bar” in Washington, D.C. The wide selection of over 60 sherries by the glass as well as special, small-production bottles attracts aficionados and the curious. Various flights offer newbies an opportunity to taste through the wine’s range of styles. Prices range from $7 to $30 a glass. Brown makes the point that sherry is a vinous bargain: Top quality bottles are inexpensive and even old and rare sherries are readily available and relatively cheap.

Both port and sherry have affinities for food, with many good and surprising matches. “A glass of port is a great pairing to our chocolate fondue, and a great way to finish off a dinner,” says Paul Brown, beverage manager of The Melting Pot. The Tampa, FL-based fondue concept counts over 120 units; more than half offer fortified wines on their dessert menus. “We are a celebratory kind of concept, and port is a celebratory wine,” adds Brown. Most port sales are by the glass, in the $12 to $15 range. “Our operators understand the importance of that add-on sale at the end of the evening and how port can enhance the guest experience,” he says. “Sherry is the most pairable with food of all wines,” says Brown at Mockingbird Hill. “You can serve it as aperitif, with dinner and after. There are few wines you can drink from the beginning to the end of the meal yet match with every dish.” At Vera, Mendez also sings the praises of the sherry match. She offers her guests this schematic: “Fino and manzanilla are your Champagne or aperitif; amontillado fits where you would use a white wine, oloroso pairs like a red wine, and then Pedro Ximenez and moscatel finish dinner in the dessert category.” Enticing pairings can really bump up the average check, believes McGinnis. He suggests a briny manzanilla with an order of fresh raw oysters. And Estrellon’s Basque cake with sour cream custard is delicious with a splash of PX on top—and a glass of the sherry to match, of course. It’s a hand sell, he notes: “That only works when the staff has tasted the combos and really gets behind the recommendations.” While port and sherry are the best known, they aren’t the only fortified wines. Examples abound in just about every long-established wine region. Particularly, Madeira and Marsala can often be found in well-stocked American wine lists. “People think Madeira and Marsala are only used in cooking, but they are delicious to drink, too,” says Derek Brown. “At 360 Bistro, we have some aged Madeiras that sell well for us,” reports Allen. “Madeira is great with dessert,” he adds, “especially those made with chocolate, caramel or peanuts.” WineStyles has offered Madeira by the glass “and found that our guests liked it better than sherry,” says Lampros. He has also held in-store seminars on Madeira—as well as on port and sherry. These are classroom-style events with expert speakers, PowerPoint presentations and tastings. “We do a great business with Madeira at L’Etoile,” says McGinnis. That wine is matched with the tasting menu there, usually the dessert course. Marsala is paired that way as well. (For more, see “Marsala vs. Madeira,” left.)

For many restaurant and bar customers these days, cocktails are the first encounter with fortified wine. “Cocktails helped push sherry back into the mainstream,” says Mendez, “which is helping customers learn to enjoy fortified wine on its own.” Vera’s list includes four cocktails featuring some type of sherry, as well as a seasonal White Port & Tonic. One of the most popular drinks is the sherry Boulevard, a variation on the Boulevardier (which itself is a variant of the Negroni) that substitutes sherry for bourbon. Cocktails are a stepping stone: “People may not know sherry or may even be intimidated by it, but they aren’t intimidated by cocktails,” says Brown at Mockingbird Hill. The Sherried Old Fashioned adds PX to the traditional recipe. The Bamboo is a Manhattan variant, substituting manzanilla for bourbon. “Using fortified wines is a way to producer lower-alcohol cocktails,” he points out. “With port, sherry and Madeira as a base, you get the same richness and intensity and an interesting flavor profile.” At Cameron Mitchell Restaurants, Valentine is busy experimenting with sherry cocktails in the company’s test bar. “Sherries are on the rise in a lot of our markets.” Estrellon’s drinks list includes cocktails like the Albariza, made with Brandy de Jerez and oloroso, honey, lemon and cherry juices and bitters. “Sherry and port seem always on the cusp of going big,” observes McGinnis. “There is recognition going on in New York, San Francisco and LA, and that seems to be penetrating from the coasts. I’m keeping my fingers crossed.”

Thomas Henry Strenk is a freelance writer based in Brooklyn, NY, specializing in all things drinkable.

Happy International Women's Day! We're so grateful for the Women of WineStyles! Thanks to your small business ownership, entrepreneur spirit and business savvy, you're a business leader in your community and our franchised organization. We wouldn't be here without you! 💪🍷👏#internationalwomensday #internationalwomensday2021 #IWD2021 #WomensHistoryMonth #SeeHer #smallbusinessowner #ChooseToChallenge #womeninbusiness #womensupportingwomen #womenpower #womenempoweringwomen ...

One of the benefits of being a franchise owner, we're a network of small business owners who work together to provide unique events and experiences for our customers. We're able to connect our local community to world renowned and family owned wineries around the globe. If you love the wine lifestyle, give us a call or visit WineFranchise.com for more info.WINERY SPOTLIGHT SERIES: Did you catch our virtual wine tasting this week, featuring French wines from DOMAINE GUIGAL and special message from winemaker and 3rd generation owner, Philippe Guigal? If not, grab the Guigal wines at your local WineStyles and "taste, learn, and enjoy" great wines with us! Be sure to follow us on You Tube and never miss a tasting, cheers!lnkd.in/eywTsU9#wineeducation #winelovers #wineandspirits #frenchwine #winestyles #wineclass #winerylovers #winerytour #wineevents#franchise #franchiseopportunities #FranchiseBusiness #franchiseowner #franchiseopportunity #winebusiness #winetime ...

Join us for a virtual wine tasting event, featuring E. Guigal wines with a special message from Philippe Guigal. Patrick Will, Vintus wine importer, will wa...
View on Facebook
· Share

LIVE wine tasting with our friends at Cline Cellars ...