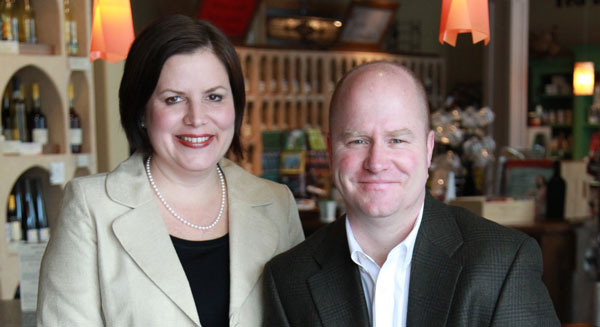 Andrea and Bryan McGinness, center, are the new owners of the rebranded WineStyles Tasting Station.

At first struck speechless when asked to buy the WineStyles system, Andrea and Bryan McGinness decided to leave behind their franchisee status and run the whole show. They’re banking on a new model with more profit centers to start growing again.

“Living the dream,” says Bryan McGinness, the new CEO and co-owner of the wine retail franchisor WineStyles, when asked how he’s doing on a late March day.

He and his wife, Andrea, who is co-owner and COO, were franchisees of a WineStyles store in Des Moines, Iowa, then area developer. They’ve purchased the entire system from Bob Spuck of Florida, moved corporate headquarters to Des Moines, added Bryan’s brother, Jeff, as general counsel and chief compliance officer, and are set to roll out a rebranded concept called WineStyles Tasting Station.

They’re still a bit giddy after making what they call a “leap of faith,” to become a franchisor. “I was speechless,” Andrea says, when Spuck, the original financier of the concept and its president and CEO at the time, asked them whether they wanted to buy the system when he visited last spring.

“When Bob came to us last April, that was the farthest thing from my mind,” she says, although she did think his timing was odd. “No Floridian wants to come to Iowa in April.”

They face a sobering reality. WineStyles is the sole wine retail franchise that remains after notable concepts like Grapes and Vino 100 and a half-dozen others fell during the recession, Bryan says. WineStyles itself is down to 42 stores, dwindling from a peak of 190 in 2008, and it had stopped selling franchises for a time. The brand’s Small Business Administration loan default rate was 52 percent in 2012.

Existing franchisees are mixed on whether they will convert to the new model, a larger store that adds a wine-tasting bar, gourmet cheese and coffee, craft beers and other goodies for sipping and tasting, Bryan says.

“Some folks say, ‘Leave me alone. I never signed on to do chocolate and cheese and beer and wine.’ Those folks, that’s fine. If you don’t want to evolve—change is going to happen whether you change or not. Then there are people who are excited.”

Although both new owners insist they’ll continue to serve stores that don’t convert, the future of the franchise clearly depends on the new format.

They wouldn’t reveal the price tag of the acquisition, but they have a seller-financed arrangement with Spuck, typical in small-business acquisitions. The asset purchase is backed by a loan from Spuck, who sold because he wants to retire, and the McGinnesses will manage the company with the goal of generating enough profits to cover the note and complete the purchase in three years.

The new model is slightly larger and the up-front investment is, too—ranging from $229,000 to $380,000, up from $180,000 to $290,000 before. They’re banking on new profit centers from all the additional goodies, and the remodeled interior that encourages mingling and tasting to bring in customers.

“You can buy wine everywhere, but you can’t go in and ‘taste, learn and enjoy’—the moniker that we have,” Bryan says.

Some stores have wine clubs, with members paying a monthly fee to get a couple of new bottles every few weeks, and that stable revenue stream helped them weather the recession. The prototype for WineStyles Tasting Station was in development under the old system, based on successful tests from franchisees.

“They really did listen to the field, and many of the stores had started to expand into these other profit centers,” Andrea says. “We have an Indiana store that had cheeses. The Minnesota store had a heavy selection of craft beers. Here in our store as a franchisee we had test-marketed those ourselves.”

“Now we’re just taking it to the next level. We’re basically executing and adding to the brand that was starting to evolve in the first place,” Bryan adds.

The new owners were poised to unveil their franchise disclosure document the first week of April, the creation of which is a monumental task for any new franchisor and one that relied heavily on Jeff McGinness’s skills.

“It’s probably one of the best decisions we made to bring an attorney on board,” Bryan says. “He’s played a huge role in the contract and the FDDs and working with Faegre Baker Daniels, the outside law firm.”

Beth Brody is that outside attorney in Minneapolis, and has experience in preparing documents for franchisors. She believes the research the new owners did to re-tool the brand bodes well for the future.

“It didn’t just happen overnight,” Brody says about the acquisition. “They had ongoing, lengthy discussions with the WineStyles people, and they talked to their fellow franchisees.
“A lot of forethought went into it, which I always like to see.”
Another plus is their work as area developers, which “gives them some of those franchisor skills, both in being able to recruit prospects and service existing franchisees. They’re worn those hats, and that’s important,” Brody says.

One of the challenges for alcohol retailers is widely varying laws from state to state, city to city, county to county.

“You better understand a market before you plop down a store,” Bryan says, “and then find out, ‘Oh darn it, I can’t do wine by the glass or I can’t do gourmet foods or I can’t do samples in the store.’ To understand what is allowed in a market is paramount for us. Even in Illinois, it goes by township. These covenants are just nuts.”

That’s part of the reason they’ll focus franchise sales in a 200- to 300-mile radius from headquarters. And they’ll put their experience as franchisees to good use.

“The reason we’ll be successful in rebranding is because we’ve been store owners,” Bryan says. “We understand what works, what doesn’t work, what to stop doing, what direction we want to take the company, as far as adding profit centers to the stores.”

Andrea says they didn’t envision any of the events. “In all honesty, when we opened up the store we had never looked into franchising. We had always wanted to open a wine store, but franchising was the last thing on our mind.” But when visiting friends in Minnesota in 2005, they saw a WineStyles store and “fell in love with it.”

Bryan is a self-described foodie who kept his corporate job with Maytag for a time after purchasing a franchise, until the company pulled out of the Des Moines area. Andrea, who has a marketing background, left her job at a local school to operate the store.

After they were offered the chance to buy the franchise, they began hard discussions to decide what to do, and finally decided to jump. Their three teenagers provided one main motivation.
“It was one of those moments where we were in the right place at the right time,” Andrea says. “We looked at it as, this is a gift that’s been given to us, we know what to do with it, and let’s take a little bit of risk and hopefully leave a legacy for our children.”

“Now we’re starting to rebuild,” Bryan adds about the brand, and he sounds like a road-tested franchisor when he hopes for satisfied operators. “I would rather see this at 50 franchisees that are all happy, as opposed to having 500 franchisees that want to hang you.”