Summertime Wines: Go Bold and get freaky at your next backaryd barbecue 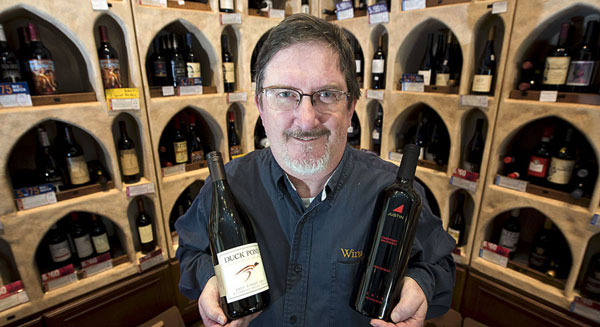 Summertime wines: Go Bold and get freaky at your next backyard barbecue

However, when eating his grilled favorites, the Sioux City WineStyles manager will be whetting his whistle with a full-bodied Cabernet Sauvignon.

Wait, Janssen alternates between reds and whites during his summertime cookouts?

OK, but do aficionados actually drink vino when the mercury’s on the rise?

While Janssen said beer is still synonymous with backyard burgers, wine is also seasonally satisfying when you’re grilling as well as chilling.

“If you ask me, wine is enjoyable any time of the year,” he said.

Well, of course, Janssen would say that. But what goes best with a slab of steak?

“A Cabernet is a natural choice because red meats and red wines make for a perfect combo,” he said, holding a bottle of Justin Cabernet Sauvignon from California’s Santa Lucia Mountains.

“I also enjoy an Argentine Malbec with steak,” Janssen said. “Nobody knows beef better than the Argentinians and a black and fruity Malbec has a big flavor that will really make a steak pop.”

Want to take a walk on the wild side this summer? You can if you mind a wine that has a sideshow strong man on its label.

“Believe it or not, the Freakshow Cabernet — a full-bodied Cab from Lodi, Calif.’s Michael David Winery — has become a local favorite,” Janssen said. “The oaky, fruity flavors pair perfectly with big steaks as well as grilled veggies.”

Well, what if you’re not in the mood for something quite so freaky for white wine fans? Janssen recommended Duck Pond Pinot Gris from Oregon’s growing wine community.

“With it’s crisp taste and floral finish, this Pinot Gris will taste wonderful with seafood, poultry and lighter kinds of food,” he explained.

“That’s the nice thing about wine,” he said. “It can elevate the taste of any food.”

But what about the wines we simply love to sip? Janssen said blended wines — blended white and red wines that are made form different grapes and varietals — will continued to be seasonal favorites.

“Women especially enjoy blended wines because they’re refreshing and some styles have a lower alcohol content,” he said.

Looking over his store’s vast selection of vino, Janssen said he considers himself to be both a wine advocate and a wine educator.

“With food pairings, the old advice was to pair red wines with red meats and white wines with white meats,” he said, shaking his head. “While that still holds true, we also realize that every palate is different.”

“If you like a certain wine, simply enjoy it,” Janssen reasoned. “That’s true in the summertime as well as all year round.”

Happy International Women's Day! We're so grateful for the Women of WineStyles! Thanks to your small business ownership, entrepreneur spirit and business savvy, you're a business leader in your community and our franchised organization. We wouldn't be here without you! 💪🍷👏#internationalwomensday #internationalwomensday2021 #IWD2021 #WomensHistoryMonth #SeeHer #smallbusinessowner #ChooseToChallenge #womeninbusiness #womensupportingwomen #womenpower #womenempoweringwomen ...

One of the benefits of being a franchise owner, we're a network of small business owners who work together to provide unique events and experiences for our customers. We're able to connect our local community to world renowned and family owned wineries around the globe. If you love the wine lifestyle, give us a call or visit WineFranchise.com for more info.WINERY SPOTLIGHT SERIES: Did you catch our virtual wine tasting this week, featuring French wines from DOMAINE GUIGAL and special message from winemaker and 3rd generation owner, Philippe Guigal? If not, grab the Guigal wines at your local WineStyles and "taste, learn, and enjoy" great wines with us! Be sure to follow us on You Tube and never miss a tasting, cheers!lnkd.in/eywTsU9#wineeducation #winelovers #wineandspirits #frenchwine #winestyles #wineclass #winerylovers #winerytour #wineevents#franchise #franchiseopportunities #FranchiseBusiness #franchiseowner #franchiseopportunity #winebusiness #winetime ...

Join us for a virtual wine tasting event, featuring E. Guigal wines with a special message from Philippe Guigal. Patrick Will, Vintus wine importer, will wa...
View on Facebook
· Share

LIVE wine tasting with our friends at Cline Cellars ...