SIOUX CITY | Jerry Janssen wants to toast the red, the white, the blue and the purple.

That’s why Janssen’s WineStyles in Sioux City, as well as WineStyles across the country, are partnering with Purple Heart Wines in a national fundraising benefit for the Purple Heart Foundation, an organization that supports U.S. veterans in need.

“Between now and Veterans Day, WineStyles will donate $1 per glass of Purple Heart Wine served and $1 per bottle of Purple Heart,” Janssen said. “It’s just our small way of saying thanks to all of our veterans.”

Plus, he said, Purple Heart Wines — launched in 2016 to honor the determination, bravery and commitment of American’s military heroes — has become a critically acclaimed red wine.
Produced by winemaker (and U.S. Air Force veteran) John Moynier, the California-made Purple Heart Wine is crafted under the close stewardship of C. Mondavi & Family, whose patriarch, Peter Mondavi, was a World War II veteran.

According to Janssen, Purple Heart Wines have the aroma of plum, cinnamon and cassis and the fruit flavors of dried currants and red and black berries.

“It has a silky texture and a long, lingering finish,” he said.

Putting bottles of Purple Heart Wines onto the shelves of his 5002 Sergeant Road store, Janssen is happy to support the Purple Heart Foundation, an organization that has been honoring the sacrifice that military veterans have made for their country over the past 50 years.

In fact, C. Mondavi & Family wines makes an annual contribution of $50,000 to a Purple Heart Foundation program that helps U.S. veterans and their families with job training, counseling and more. 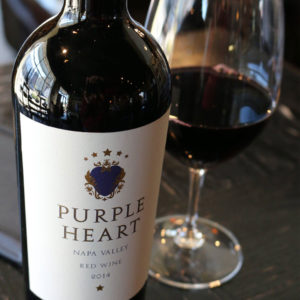 Although he was never in the military, Janssen always had an appreciation for those fighting for their country.

Plus some may also be wine drinkers.

Which is why Janssen said WineStyles’ fundraising campaign will conclude with a special Veterans Day “Toast our Veterans” tasting event from 6 to 8 p.m. Nov. 11.

“We want everyone to join us as we lift a glass and pay tribute to our brave military heroes and thank them for their profound contributions,” he said.